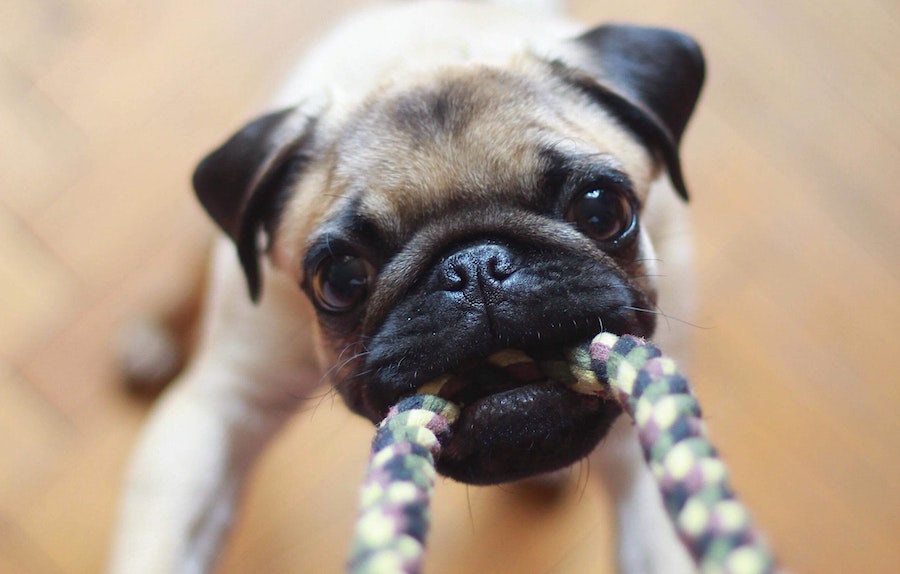 Tug of War has had a bad rap for decades because of what dogs do during the game—growling, tugging and head shaking (aka ragdolling) with increasing intensity until the human breaks off, fearing the dog is getting too competitive, aggressive or dominant with parents.

Some behavioural study has been dedicated to observing canine reactions during tug of war and the results turned that theory on its head. “Tugging on Mr. Squeaky Dinosaur is not about dominance, it’s about lunch…It’s an intense, pleasurable experience the dog will intimately associate with you.” (The Culture Clash, by Jean Donaldson, p39)

So exciting is the game to dogs that it ranks near the all-time best of canine enrichment activities.

Tug of war taps into the highly social and cooperative effort between pack members to kill and divvy up dinner among them. In this way, it connects to food or, more specifically, the moments before food is eaten when the anticipation is the highest. Perhaps the strongest evidence that supports the cooperative assertion is that, as soon as one lets go of the toy, the pup returns happily with the item to renew the game. That means, in turn, that there is no competition for the toy and no predation upon the human. If there was, the pup would have a strong preference for snatch and run, or chomp down on human hands. “The game doesn’t make the dog a predator: he already is one. The game is an outlet.” (p38)

Tugging on Mr. Squeaky Dinosaur is not about dominance, it’s about lunch…It’s an intense, pleasurable experience the dog will intimately associate with you.

Tug of war is played precisely for sake of tugging…to satisfy the dissect and eat needs in the predatory sequence. It’s also terrific exercise for those playing the game, with the added benefit of reducing behaviours associated with under-stimulation. Feed the need.

Establishing boundaries around tug of war

Boundaries are quite important in the game between humans and dogs. Parents must condition the pup to release before playing tug full tilt—for several good reasons.

Without teaching a release cue, like leave it, drop or let go, then every item the dog picks up can turn into a tug toy, including valuable items. Also, and much more critically, dogs with prey drive see small-breed pups as toys or prey. Parents must have absolute control by conditioning a strong and reliable release cue, in puppy hood. Practice the cue continuously during the game so that it works when the dog is revved up, in any environment.

Rule #2: Dog Must be Invited to Play by the Human, and not Takeup or Re-Takeup on his Own

The human must have full control over when the game is played or the dog will initiate when he shouldn’t, and with items he shouldn’t.

To teach Rule #2, consistency is our best friend. Start every game of tug with a cue to play the game, coupled with one appropriate tug toy, without fail. A cue to play could be an excited play tug, or get the rope. Present one tug toy. This teaches the pup to listen for the cue and what toy is appropriate. That one toy can be as a hide and seek or chase and retrieve toy as well, but when the game is tug, always remember:  one toy only.  When it ruins, buy another and re-condition the pup to the next one toy.

Practice the release cue. When the pup releases and grabs for the toy again without the cue to play tug, confiscate the toy and give a time out for the pup to reset and not take up play without invitation. Practice often to proof the dog for tug in all environments. Practice makes perfect.

Reward with treats, praise, love and continued play. Tug is so powerful and enjoyable to dogs that play itself is a giant reward. Tug can be used as a training reward while teaching other things, like Come, Sit, and Stay.

Tug is so powerful and enjoyable to dogs that play itself is a giant reward. Tug can be used as a training reward while teaching other things, like Come, Sit, and Stay.

Rule #3: Time outs for all non-compliance or accidents

Because Tug is so exciting, the human and an amped-up pup may not notice that a finger is misplaced on the toy. It happens a lot and injuries do occur. Every time a pup makes contact with skin, whether it hurts or not, let out a good yelp, remove the toy and take a time out. This teaches the pup to control jaw pressure at all times, without exception. This must be conditioned strongly, so a zero tolerance policy is needed. The best reason for it is because Tug is so exciting. When dogs are that excited, they can get sloppy. Rule #3 teaches care at all times.

When the pup is fully trained, go wild! Play often. He/she will be among the happiest on earth.